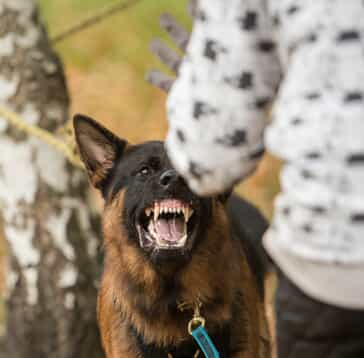 BITTEN BY A DOG? THE OWNER MAY BE AT FAULT.

Man’s best friend can sometimes become a liability for owners. All dogs, no matter what type or size, can injure a person – whether a stranger, friend, and even a family member. Unfortunately, dog bites are a common occurrence.

According to the Virginia Department of Public Health, more than 4.7 million people are bitten by dogs in the U.S. annually and nearly 20% seek medical attention for injuries and infections from the bite. Most bites occur within the dog’s home but almost 40% of dog bites occur outside the home.

The following injuries could be incurred from a dog bite:

If you have been injured by a dog, talk with one of our seasoned attorneys at Huffman & Huffman Brothers-in-Law. Schedule a case evaluation by calling 757-525-9820. You do have rights if a dog bites you because of its owner’s carelessness.

Here is some useful information for both dog owners and someone who has been injured by a dog.

If the dog has bitten before, then the owner knows or should know that dog could bite again. The one-bite rule also includes other ways a dog can injure a person such as an injury from a fall caused by the animal. Owners are expected to take appropriate precautions to prevent future bad behavior. When they do not, they may be held liable for any injuries caused by the dog.

Other Evidence of Owner Negligence

Although Virginia has the one-bite rule, those that were injured by the animal are also allowed to present other evidence that shows the owner knew or should have known their dog has dangerous tendencies. Based on the specifics of the situation, an owner may be held responsible even if their dog has never bitten anyone before. For example, if the dog has aggressively barked, growled, or lunged at someone, that is evidence that the owner knew or should know that the dog may bite.

Additionally, in Virginia, the negligence per se principle can allow victims to seek damages if there is evidence that the owner was otherwise negligent in some way.

If owners don’t demonstrate reasonable care or obey city and other ordinances, they might be held liable for any injuries caused by their dog.

Just like in auto accidents, Virginia is one of the few states that has contributory negligence. The dog’s owner may argue that the victim provoked the dog in some way. If that is true, the injured person will likely be barred from receiving any compensation. Virginia is among a handful of states that denies any damages if the victim is even 1% responsible for their injuries.

When the victim bears no responsibility for the injuries caused by the dog, then state law places no cap on the amount of compensatory damages that could be awarded. These damages include lost wages, medical bills, rehabilitation, pain, suffering, and more.

Local Fines and Penalties Can Be Imposed on Owners

A civil lawsuit is not the only potential consequence of negligence. If a dog is habitually at large running loose, many cities in Virginia have enacted nuisance laws where the dog owner could face fines and fees. Owners may be required to maintain liability coverage that covers dog bites. The pet faces removal, confinement, and even euthanasia. Some nuisance laws, if it involves an attack, could even include a jail sentence for the owner.

A dog can be labeled as vicious if they kill or seriously injure someone. In these cases, the owner could be charged with a class 6 felony. The penalties include up to 5 years of prison and a $2,500 fine. A felony criminal record can also follow the person for the rest of their lives. A felony impacts their ability to get housing or a new job and generally precludes them from owning a firearm.

Like other personal injury cases, there is a two-year statute of limitations in dog bite lawsuits. That means the victim has two years from the date of the attack to file a lawsuit. If the suit is not filed within that timeframe, the court will refuse to hear the case.

Have you been bitten by a dog or another domestic animal?

At Huffman & Huffman Brothers-in-Law, we have five decades of experience in a wide array of personal injury cases, including dog bites. We always strive to provide outstanding legal help for our clients and fight for their fair and full compensation. Because of Virginia’s contributory negligence and the complexity of navigating a dog bite case, it is important to talk to us first for guidance.

Call us at 757-525-9820 or reach out using our online form to schedule a no-cost consultation. We’ll come to you and help provide guidance on what to do next. If you become a Huffman & Huffman client, you’ll pay nothing unless we win. Let our family help your family get the compensation you deserve.